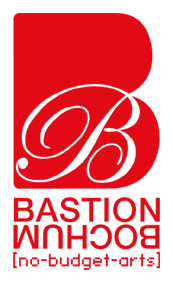 The city of Bochum, right in the middle of the industrial area the Ruhrgebiet, not only hosts over 370.000 inhabitants. This city also hosts the No-Budget-Artscentre: Die Bastion. Founded in 2002 this theatre, bar, cinema, exhibitioncentre etc. is being runned by Moana Köhring and Daniel Nipshagen.

Moana Köhring, born in east Westphalia, was predestinated with her long dark brown hair to perform her first acting as Snowywhite. Eversince trying to fullfill her biggest wish: conquering the the world by stage! Besides her love for theatre she also studied classic piano for mlore then ten years and philosophy. Her debut in front of a large audience took place in 1999 at the city of Bielefeld. Also she supported the Heiner Müller Quartet in Bielefeld working as the prompter. Halting her studies without hesitation to make her deam come through: starting her own theatre: Die Bastion. Doing so in coöparation with Daniel Niposhagen.

Born in Hattingen, near Bochum, Daniel left the village... and never has been their again. And why should he? Bochum is the the place to be for Daniel . He also started his career  very young. At the age of ten he played in The Nasser by Franz Xaver Kroetz in the Schauspielhaus Bochum. Beccause of the obscene caracter most of the audience closed both their ears and eyes. Another similarity with Moana is his love for music. Training his voice in the Childrens choir of Bochum and abusing this knowledge by singing and playing guitar in the trash-metalband Katyn. 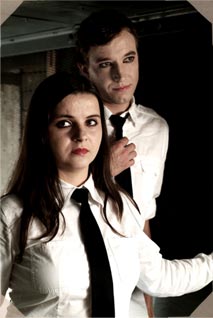 He ,another similarity,also halted his study at University and started working with young homeless,mentaly ill and disabled. Both loving art, theatre, music, cinema etc.. Teaming up with Moana was inevitable. The one and most logical step waiting to be made: founding Die Bastion.

Their lives,their path of lives being exactly the same cross-over as their professional work. Like pieces of a puzzle always being put on another place until they fit like a glove. Especialy their work as the Teenage Angst Ensemble resembles a gigantic puzzle. Watching the Teenage Angst Ensemble's trilogy The Espelkamp Tapes,The House and the Lumen they will take you on a journey. A journey with bizar secrets and even more bizar fragments. Surching in the past, exploringthe passion, discovering the utmost depth of the human being.All this resulting in an audience feeling the fear, the anger and the love of live. Classic theatre, video, LP's, performances and lots more is to be found in this trilogy. It's to be found in all the Teenage Angst Ensemble's work. A flabbergasting mix is waiting their for you!